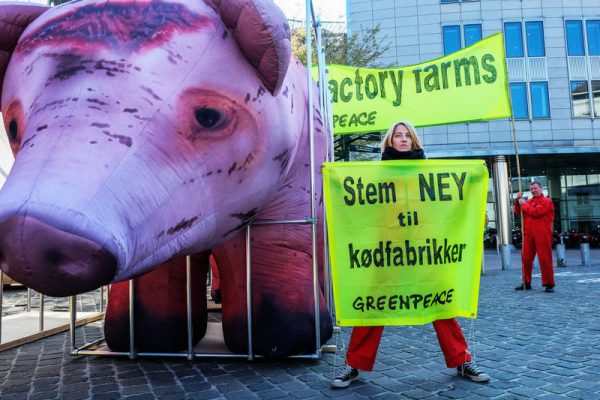 Greenpeace activists in Brussels call on the European Parliament's agriculture committee to vote to cut public funding for factory farms. Activists deploy a giant inflatable pig in a cage, other cages that the public could enter in, and a banners in various languages reading "Vote NO to Factory Farms."

The MEPs were voting on a European Commission plan to reform the EU’s common agricultural policy (CAP).

The agriculture committee rejected proposals made by the environment committee to cut public funding for factory farms and to limit the number of animals crammed together on farms receiving EU subsidies. The committee also voted against making CAP payments conditional on basic animal welfare standards, including giving farm animals enough space to move, turn around and lie down.

MEPs on the committee opposed the introduction of targets to decrease the amount of livestock to reared on limited land so that manure can be disposed of safely, and rejected an increase in the share of CAP subsidies for ecological and climate-friendly farming.

Greenpeace EU agriculture policy director Marco Contiero said: “It’s shameful that the agriculture committee has backed factory farms, which harm the environment and the climate, mistreat animals and drive small farmers out of business. But the EU Parliament as a whole can still follow the lead of the environment committee and cut public subsidies for factory farming, promoting smaller family farms with higher environmental standards instead.”

The Parliament’s environment committee voted on the reform of the CAP in February, approving cuts to funding for factory farms, and backing the introduction of higher environmental and animal welfare criteria, as well as increased funding for environmentally friendly farming.

Newly elected MEPs will have to choose between voting in plenary on the basis of the recommendations of both committees, or starting from scratch by holding new committee votes.