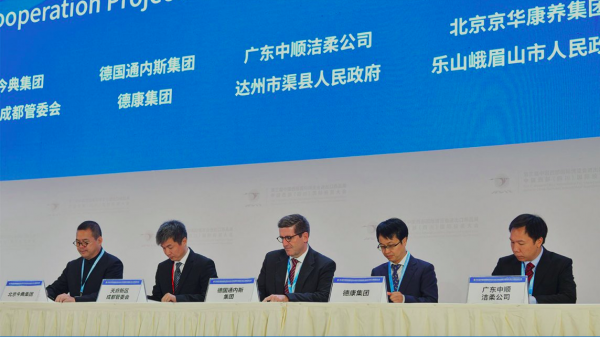 The Tönnies Group continues to further their internationalisation strategy and is setting up the first production location outside of Europe. Together with the Dekon Group, a subsidiary of the West Hope Group, Tönnies is now signing a memorandum of understanding for a slaughter and butchering centre in the Sichuan region, initially for two million pigs, which will be run as a joint venture. In a second phase, this will be expanded to six million pigs.

“We are proud to be starting a new chapter in our company history together with our partner, the Dekon Group” explained Tönnies CEO, Andres Ruff, during the signing at the Western China International Fair. “With our competence in the slaughter and butchering of pigs and our knowledge of the prerequisites, safety and hygiene in food production, we can further consolidate pork production for the Chinese market.”

The two partners will set up a new abattoir and associated butchering business for pork in the Sichuan region. The abattoir is designed for approx. two million pigs and is constructed according to the model of the Tönnies businesses in Germany. The total investment amounts to EUR 500 million, of which around EUR 150 million is accounted for by the slaughter and cutting centre.

“In Sichuan, the first plant is being constructed in compliance with the European standard for pork products. From breeding to slaughtering to processing, we will achieve complete integration in food production,” said Wang Degen, CEO of the Dekon Group, after the signing.

“The demand for pork in China and many other Asian countries is great and will continue to grow in the coming decades”, said Clemens Tönnies, Managing Partner of Tönnies Holding. “This joint venture is the next step in our internationalisation. We are bringing our knowledge of food production based on German standards to the world and strengthening the quality and safety of the supply in China.”

The Chinese food market is currently in a state of transition. African swine fever has culled stocks in parts of the country. Micro-businesses and backyard farms are now being replaced by agricultural companies whose biosafety corresponds to western-European standards. “We want to make use the spirit of optimism in China and produce quality meat for the Chinese market” explained Ruff with regard to the market.

By signing the official memorandum of understanding, both companies want to start the joint venture now. The foundation stone for the production location is due to be laid in 2020.

About Tönnies – Tönnies is a multi-tier company in the food industry and is active around the world. With production locations in Germany, Great Britain, France, Spain and Poland, the company is split into eight divisions: Meat Pork, Meat Beef, Convenience, Sausages, Ingredients, International, Logistics and Central Services. The core business of the company, which was established in 1971, concerns the processing and refining of pigs, sows and cattle.