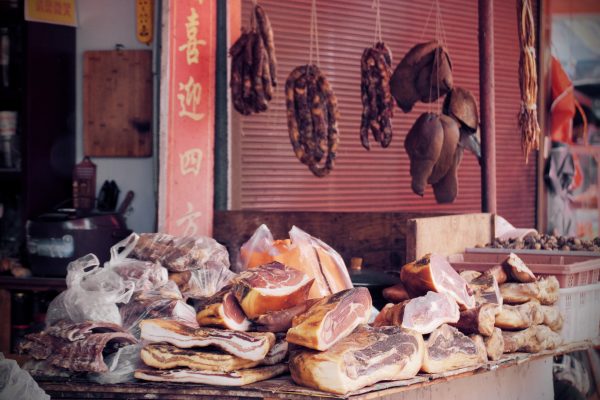 With hundreds of millions of pigs dead from swine fever, exporters are scrambling to fill the gap. But prices are soaring.

The cost of living in China has outstripped the 3% government target for the first time in a decade, and a big part of the problem is the soaring price of pork, which is being driven up by a widespread outbreak of African swine fever (ASF).

Pork is a big deal in China. The average Chinese person gets through about 30kg of pork a year (by comparison, people in US eat about 26kg of beef a year and UK consumers about 18kg). Since August 2018, when China notified the World Organisation for Animal Health that ASF was in the country, the disease has spread with extraordinary speed.

Some 40% of Chinese pigs – hundreds of millions of animals – have now been lost, and the result has been a chronic shortage of pork and rocketing prices. The Chinese government has been forced to dig into its gigantic emergency reserves of frozen meat.

“The producer price has risen 125% since July,” said Rupert Claxton of international food consultancy Girafood. That increase has helped drive up China’s inflation rate, which in October broke through the government target of 3% to hit 3.8%.

Zhu Zhenchun, a restaurateur in Shenzhen, south-east China, told the Observer: “We’re spending about 10,000 yuan more a month just because of the price increase. [That is the equivalent of monthly salaries for two restaurant employees.] Everyone knows this is a problem now. Everyone is hoping the price will come down either before or just after Chinese New Year. If it doesn’t, that could make some people think differently about their businesses.”

Pork imports into China have also rocketed. In September last year 94 million kg were shipped in, but the ASF crisis has pushed imports to 161 million kg this year and officials are now rushing to certify farms in Brazil, Ireland and several other countries for export at an unprecedented rate to satisfy demand. Two weeks ago, they lifted a ban on imports from Canada.

As a result pork prices are rising outside China too. Europe has seen a jump of at least 35% since the beginning of the year. “The problem is that total global pork exports in 2018 were 8 million tonnes, and China is short 24 million,” said Claxton. “There just isn’t enough pork in the world to fill the gap.”

African swine fever is a highly contagious virus which is fatal to pigs. It is extremely hardy, can survive being cooked and processed, and will endure in frozen meat for a number of years. It is transmitted directly between animals, or by the feeding of infected meat, and there have also been cases of infected animal feed.

ASF has been circulating in Europe for a number of years, but it began to spread at a more rapid rate last year. It is now reported in more than 40 countries, and earlier this week was discovered to have leapt 300km across Poland from its easternmost provinces to farms near its western border.

Alistair Driver of UK monthly magazine Pig World said this was extremely concerning. “That is just 70km from the German border, and Germany is one of the largest pork exporters in the world.”

In China, and neighbouring Vietnam, the disease has spread with shocking rapidity, thanks partly to local buying habits: live pigs are regularly transported to supply the markets and butchers where most consumers buy their pork (there is still some distrust of the chilled meat in plastic packages that western consumers prefer). And despite recent government plans to modernise, the Chinese pig industry is also still dominated by small backyard farmers.

The fact that there is very little compensation available for farmers whose pigs contract ASF has raised suspicions that some infected pigs are taken straight to market and sold into the supply chain. “This is one of the reasons why western governments compensate farmers,” said Claxton.

The rest of the world is waiting anxiously to see where ASF will hit next. The US is currently passing legislation to increase the number of border inspectors, while Denmark and Germany are building sturdy fences in a bid to keep out wild boar.

“In the UK it is now more a case of being prepared for it to arrive than trying to shut it out,” said Zoe Davies of the National Pig Association. She worries about the large number of smallholders in the UK “who aren’t taking this seriously, who believe that pigs are there to recycle kitchen scraps. Just one pet pig [with the virus] and that’s the UK shut down.”