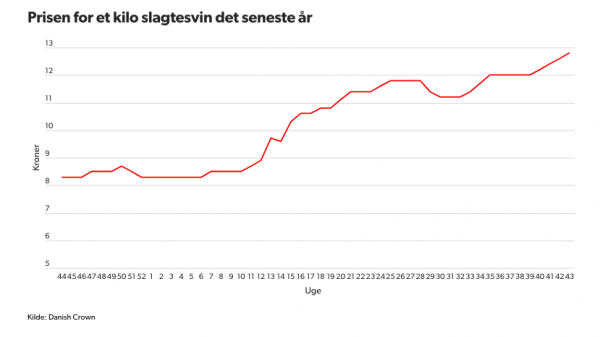 Pig prices have mainly been rising because China is currently affected by the deadly African swine fever virus. China accounts for half of the world’s pig production, and the outbreak of swine fever in China means that about 200 million pigs have died. This is equivalent to a quarter of all the world’s pigs having disappeared.

This is what is causing the demand for Danish pork to rise, and it is pushing up prices. Pig prices have risen steadily over the past six months, but especially in recent weeks, price rises have accelerated.

“We are seeing big increases right now as we approach the Chinese New Year. We are also approaching the Christmas holidays, where many countries have pork on the menu” says Lars Albertsen, global sales director at the slaughter giant Danish Crown.